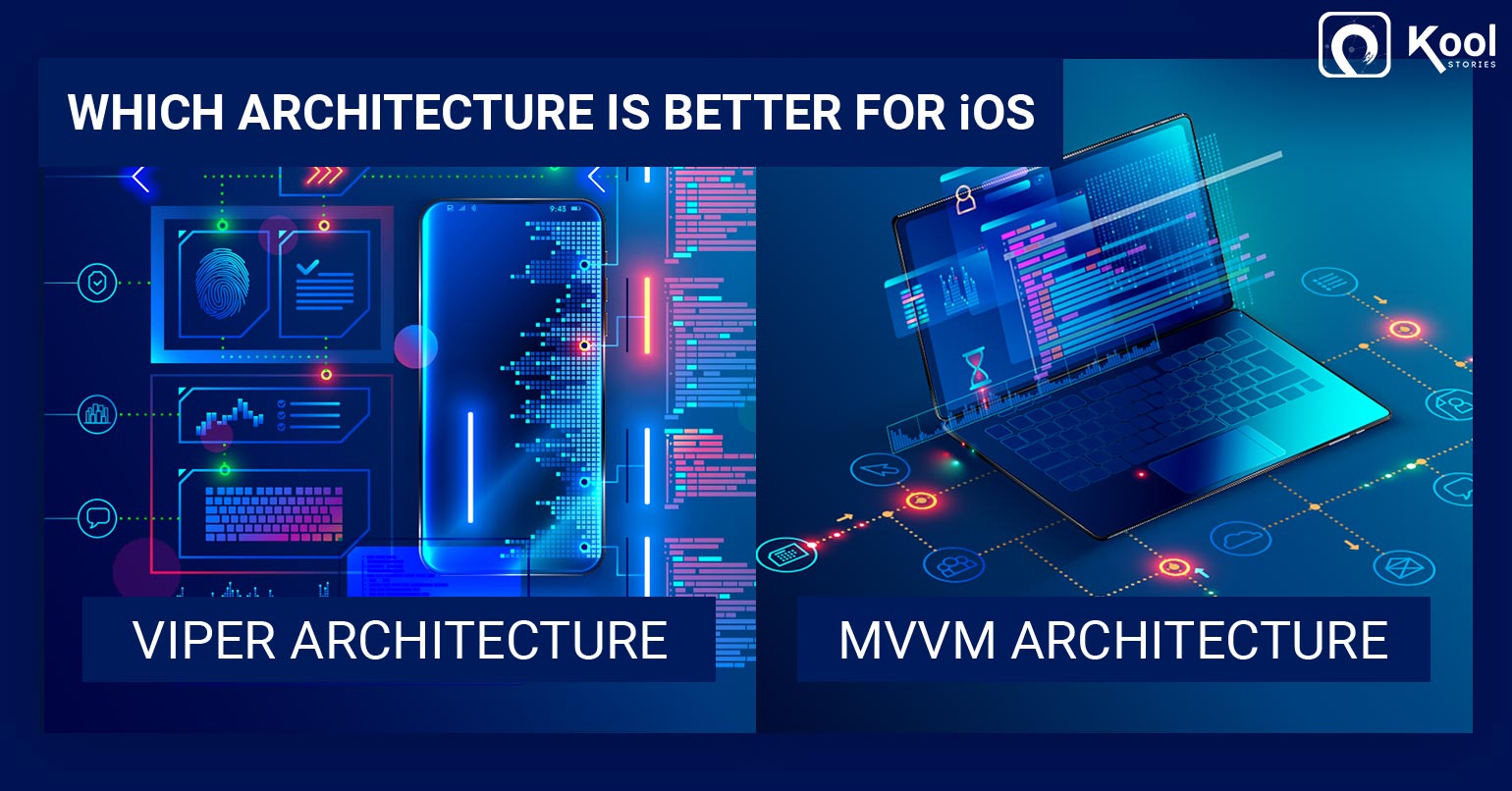 Until now, the crux of the debate about iOS app creation has always been choosing between Objective C and Swift as the best programming language. New-gen developers are constantly looking for details that will make the process of creating a cutting-edge app easier. As a consequence, they've come across a concept known as – App Architecture.

There are numerous iOS design patterns to choose from, but selecting the best of them can be difficult. In this rapidly emerging digital space, tech-oriented startups are springing up with game-changing app concepts, leaving developers stunned and perplexed for the most part. Creating an iOS application is a daunting task.

From choosing application technologies to determining interface compatibility to resolving navigation problems, the developers trail many functionalities while simultaneously finding inspiration from previous development methods to create an app that gains traction in a short period. After the introduction of on-demand services, various types of applications have become a modern revolution for smartphones, allowing consumers to carry all of their functionalities in their pockets.

As mobile apps have developed into a new requirement in the modern age, developers have become more innovative in their approach to app creation. Choosing one of the best and most common iOS architecture patterns for building an app has taken a quantum leap in how mobile app creation is approached.

What is the architecture of an iOS app?

App architecture is a diagram of several key elements that describes the structure for an organization's application solutions, allowing them to easily communicate with one another and meet both business and consumer needs. The key reason why developers spend so much time building an iOS architecture by adopting iOS app architecture best practices is to ensure that the apps they're working on are scalable and dependable.

The design of various aspects of your app or software is decided by the iOS architecture patterns you select.
MVC, MVP, MVVM, and Viper are some of the best-suited iOS design patterns. For those who have been designing software for a fair amount of time, MVC is a well-known term.MVC is an acronym for Model View Controller, which is a pattern that divides a project into three parts: Model, which represents the entities; View, which represents the user interface; and Controller, which connects the other two components.
Apple suggests that we arrange our iOS projects in this manner.

You're probably aware, however, that projects can be incredibly difficult to manage: handling network requests, parsing responses, accessing data templates, formatting data for the interface, responding to interface events, and so on. You'll end up with massive Controllers that are responsible for a variety of tasks and aren't reusable at all.
To put it another way, MVC can be a nightmare for developers in charge of project maintenance. But, for iOS ventures, how can we achieve a stronger separation of concerns and reusability?

We'll look at MVVM and VIPER design patterns, two common MVC alternatives. Both are gaining traction in the iOS community and have proven to be viable alternatives to the conventional MVC model. As the new development methodologies rely upon component-based architecture where anything you create is treated as a component of some bigger component, page, or functionality, we should take a quick look at what Component-based architecture is.

What is a  Model View-View Model? Are you having difficulty deciphering the architectural trends for mobile app creation techniques because you're surrounded by too much technological jargon?
Let me explain the MVVM design pattern to you in layman's terms.
So, if a model necessitates the separation of the GUI from the business development logic, developers tend to use the MVVM architecture for iOS app development. The MVVM not only provides a full view model but also provides XAML platforms with a built-in pattern.

In MVVM, there are three essential elements: –
⦁    Model – A model is a data processing structure.
⦁    View – The presentation layer is handled by views.
⦁    ViewModel – serves as a link between the Model and the View.

Not only for iOS but also for Android development, the MVP and MVVM patterns are very common. Caliburn Micro, Prism, and MVVM Light are some of the most common MVVM android example frameworks that developers can use to construct an iOS app.MVVM prevents UI from being an intractable class by adding display control features.

Model: As opposed to MVC, this is the only layer that does not shift. It also serves the application's data model layer and can also hold business logic obligations. Build a manager class to control model objects and a network manager class to handle requests and data parsing.

View: Things begin to change in this region. In MVVM, the view layer contains the user interface (UIView subclasses, xib, and storyboard files), view logic (animations, drawing), and user input handling (button clicks, transitions, etc.). In MVC, those are the View and Controller's duties. This means that your views will stay the same, but your view controller subclasses will only have a small subset of the roles they had in MVC — which will shrink dramatically.

ViewModel: Much of your normal controller code will now be stored in ViewModel. The view model layer will request the data from the model layer (which may be local database access or a network request) and transfer it back to the view, formatted for display. However, it's a two-way system; when appropriate, user feedback will also be routed through the view model layer to update the model. Since the view model defines what is shown, a data linking mechanism between the two layers is advantageous.

Benefits of Using the MVVM Platform

MVVM is a design pattern for iOS mobile app creation that aims to modularize the code for UI architecture.MVVM takes the seat and bridges the vaguely coupled structure between all elements, whereas other architectural iOS patterns such as MVP and MVC make the controllers very heavy and convoluted. Apart from that, it emerges as the most critical consideration for developers because it helps them to conduct test-driven creation and write down Unit Test Cases for View Models (see MVVM in Flutter). Although keeping the controllers in code management, finally gives iOS programmers an understanding of where they went wrong.

What exactly is a VIPER? Finding an appropriate architectural solution can be difficult at times. Especially if you're unfamiliar with such concepts and don't understand how each of the architecture patterns works and what benefits they can bring.VIPER (View, Interactor, Presenter, Entity, and Router) is a five-element model that catches developers off guard with clean architectural patterns.
VIPER is the industry's best and unbeatable when it comes to creating iOS architecture patterns with a model based on modular code-based theory. The roles of five VIPER architecture components are as follows:

In terms of unit testing, VIPER consistently outperforms other common iOS architecture patterns. Its straightforward yet impressive distribution of multiple patterns and components glides through the available realization with ease.

View: The interface layer, which includes UIKit files, is referred to as View (including UIViewController).In a more decoupled architecture, it's obvious that UIViewController subclasses should belong to the view layer. Things are pretty much the same in VIPER as they are in MVVM: views are in charge of showing what the presenter asks them to and transmitting user feedback back to the presenter.

Interactor: This part includes the business logic outlined in the application's use cases. The interactor is in charge of retrieving data from the model layer (via network or local database), and it is completely independent of the user interface. Since network and database administrators are not included in VIPER, they are handled as separate dependencies.

Presenter: This component contains view logic for formatting data that will be displayed. This is part of the job that the ViewModelController in our example does in MVVM. The presenter takes data from the interactor, generates a view model case, and passes it along to the View. It also responds to user feedback by requesting more information or returning it to the interactor.

Entity: In other architectures, it shares some of the model layer's obligations. The interactor and data managers handle entities as basic data structures with no business logic.

Router: The application's navigation logic. It does not seem to be a big layer, but if you have to reuse the same iPhone views in an iPad app, the only difference is how the views are displayed. This protects your other layers, and the Router is in charge of the navigation flow in each case.

When compared to MVVM, Viper has a few main differences in responsibility distribution:

Benefits of Using the VIPER Framework

Are you worried about using best practices for iOS software architecture?VIPER, on the other hand, may be the best option for you. Since VIPER gained a lot of popularity up until last year, developers tend to be fascinated by this design pattern, and the way it isolates modules to remove any uncertainty for developers is just phenomenal.
When it comes to creating an over-the-top iOS app for your client, having ample knowledge of the design pattern is crucial.VIPER is realistic in terms of fitting each part together in a logical fashion, even though each pattern serves a particular and unique purpose. VIPER is based on the Single Responsibility Principle (SRP), which is commonly used by developers to create clean software architecture.

Do you ever wonder which iOS architecture pattern is the best fit for you? To be frank, it's one of the questions that any developer should ask themselves because there's no one-size-fits-all pattern that will work for everybody. There are various factors to consider when choosing the best iOS architecture pattern for your next app development project; some of the most significant ones are mentioned below.

As you can see, while MVVM and VIPER are distinct, they are not mutually exclusive. The MVVM pattern only specifies the presence of a view model layer in addition to the view and model layers. However, it is unclear how this view model is generated or how data is collected, and not all tasks are specified. It's flexible and can be used in many ways.
VIPER, on the other hand, is highly specialized software architecture. It has several layers, each with its own set of obligations, and is less adaptable to change.VIPER can also use view models generated by its presentation layer.
There is no magic bullet when it comes to deciding between the two and there is not a clear MVVM vs VIPER in terms of choice, but there are a few pointers to consider.VIPER is a better choice if you are working on a long-term project with well-defined specifications and a plan to reuse components. Testability and reusability are improved by a better division of concerns.
However, MVVM is a great fit if you're prototyping or working on a short project with no need to reuse components. For small responsibilities, you can need to build a lot of classes and protocols with VIPER (think of an "About Us" screen).
Due to its less-than-clear separation of concerns, MVVM generates significantly less code and can escape some of the overhead caused by VIPER. Your code will be much simpler to write, and it will also be much easier to test and maintain.

Connect with fellow iOS programmers on KoolStories. Download the app now to unleash unlimited skill-sharing opportunities in a social setting where you can easily learn, earn and make a difference.