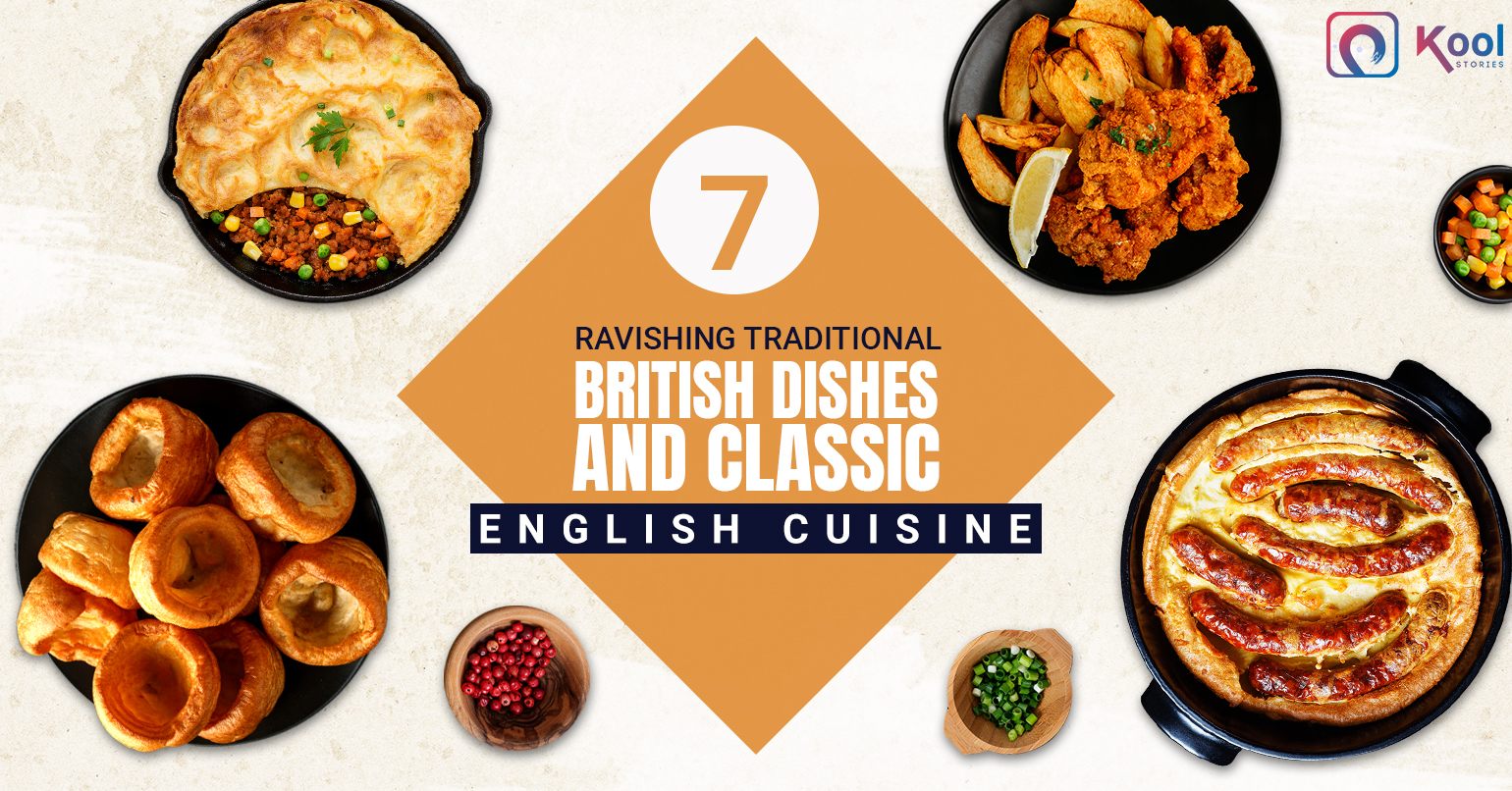 Just like the fry up witnessed vast influences over a period of time, the classic British dishes are also an amalgamation of pulsating hues of history.
Cuisines shape up culture and contribute to its richness. But there is a vibrant history that works behind these elements that shape up a country’s popular culture. This is typical of English food too.  Although, something truly magnificent about classic British dishes is their simplicity and wholesomeness that makes the flavours so exquisite.
There is an array of colourful influences to be seen in savoury English food. If you are eager to cook authentic British cuisines staples or look forward to enjoying these delicacies in the UK, here is a list of eleven typically British dishes.

History of Food in Britain

“They came on their horses to conquer our lands and gave us food to cherish forever”.
The history of Britain’s food culture is no less than a fairytale. Three culturally diverse nations of Wales, Scotland, and England contribute to this lavishness. Each new empire that came to rule brought indigenous dishes, exotic ingredients, exclusive culinary herbs and spices, advanced cooking techniques, and refined eating habits.

The oldest documented history of England begins with the invasion of Anglo-Saxons, Romans, and the Vikings. Each new ruling power has helped shape the culturally diverse United Kingdom we know today. Their influences can not only be traced back to cuisines and culinary art but are evident in politics, language, values, belief systems, attire, and arts.
The Vikings and Danes showed Britain how to cook fish. They introduced the culinary technique of dry smoking.
Romans, on the other hand, introduced Britain to cherries, cabbage, peas and stinging nettles. They also greatly modernized crop cultivation (specifically corn).  Not to forget, they brought wine to this great nation.
The Saxons were terrific farmers who cultivated a range of herbs.
Apparently, our ancestors weren’t doing it quite right; the Normans showed us how wine is the best companion for every meal. After refining eating habits, they helped polish food vocabulary giving us mutton (mouton) and beef (boeuf). The Phoenicians injected Cornwall with saffron which is an inseparable part of British cuisine but was limited to the elite back then. The influence of the Franco-Norman invasion is visible through the use of spices like nutmeg, pepper, ginger, and mace.
The Tudor reign ushered in a new phase of trade. This opened gates for spices from the East, tea from India, potatoes from America, sugar from the Caribbean and coffee and cocoa from South America to make their way to Great Britain.
As Britain’s cuisine started getting more diverse, the East India Company developed its own version of the traditional Indian dish Khichri and called it “Kedgeree”. Apart from this,  England extended this relationship with India and solidified it by using their sauces, creamy curry, and other exotic condiments.
Centuries after centuries, the traditional British dishes began to take shape. Depending upon their popularity and ease of ingredients availability, British cuisine gradually evolved to embellish English heritage. With newer technological assists, English cookery became highly modernised and gave rise to the best British dishes.

Heard of the famous English breakfast? If you are fortunate enough to visit the land of the Rose, these traditional dishes are a must-try. If you stan, these dishes have super easy recipes too.

Those of you new to this dish may mistake it for a dessert. But, in reality, shepherd’s pie is baked meat pie prepared with minced/diced lamb, served with mashed potatoes. Another variant, featuring beef is called cottage pie.
You are seriously missing out if you didn’t get to taste authentic shepherd’s pie. This classic British meal originates from Scotland and Northern England. Just like everything has a history attached to it, the tale behind the origin of shepherd’s pie comes from the economic housewives of the 18th and 19th centuries.  As per the popular tale, housewives invented this dish to reuse leftovers of Sunday’s roast.

The list of bizarrely named British delicacies is incomplete without toad in a hole. As per the tale, the odd name gained currency from its final appearance, the dish resembling toads lying in their Earthly burrows.
The name which might have begun as a tongue-in-cheek comment stuck with the dish and is a matter of curiosity for non-natives. This English food is simply a batter-pudding containing meat shaped into sausages. The meat substitutes include lamb kidneys, beef and mutton. There are absolutely no toads used in the making!

It is typical of British recipes to deceive people with their misleading names and taste. Oftentimes, the word ‘pudding’ or ‘pie’ is used for anything, including desserts. Unlike Shepherd’s pie, Yorkshire pudding is a simple mix of eggs, flour, milk and salt and is used as a side dish or a dessert
The first recorded recipe of this traditional British dish cropped up in 1737 in the book The Whole Duty of a Woman. But it was Hannah Glasse who popularized the prefix “Yorkshire” in her book The Art of Cookery, Made Plain and Easy.

One dish loved by every Briton? It’s fish, chips and mushy peas without a doubt. Both London and Lancashire take credit to have invented this mix of the cheapest yet palatable components of Britain’s national dish. There is a reason why Winston Churchill called fish and chips the “the good companions”. This hearty and filling combo is Britain’s comfort food, a national dish and the most favoured take-away food. But for an authentic taste, go to Cod’s Scallops- they are UK’s top-rated fish and chips shop.
Be it a casual Friday night or a traditional D-day; this dish remains are a staple. Its unprecedented demand makes it widely available nationwide.

Gordon Ramsay calls it the “ultimate indulgence” and is Britain’s all-time favourite main course. To trace the origins of this famous British classic, go back in history to 1815 when the Duke of Wellesly won the battle of Waterloo. Since the Wellington closely resembles the French filet de boeuf en croute, it is believed that the dish may have been stolen and renamed after the War of Waterloo.
With so much history behind its name, the dish is a steak fillet, patê coated and rolled in pastry.

Desserts find a special spot in traditional British recipes. This is what makes the English cuisine so filling and ample. Apart from conventional names, something so casually labelled as Eton’s mess is one of the best dishes to try when you are in the UK. It gains its popularity from Eton College where it was first served in 1893.
Eton’s mess is a mixture of cream, berries and meringue. Since it is so easy to whip up, you can find it all across Britain. Although nothing too fancy, but is exquisite to look at.

How can we forget the classic fry up? It is popular countrywide and is a classic that represents British food on an international level. As explained above, the Anglo-Saxon influence is pretty evident, although its ingredients are now standardized. It is widely available all over the UK and has its regional variations too.
The ‘common’ or staple ingredients of the full English breakfast include eggs, bacon, toast, tomatoes, sausages, beans, and mushrooms. However, the Scottish variation has black pudding (blood sausage) as one of the ingredients.
The more traditional ingredients include bone marrow, crispy pork roast and pork chop.
This meal is so filling that it is not necessary to have it for breakfast. You can have it at lunch or dinner too. Such a figment of Britain’s cultural fabric and tradition dictates that it tastes best when eaten alongside reading a newspaper.

Apart from these seven popular British foods, the cooking community on KoolStories is buzzing with a lot of delicacies. Join our like-minded people platform to unlock all the action.