Who’s Who in the Kitchen Hierarchy of UK Restaurants 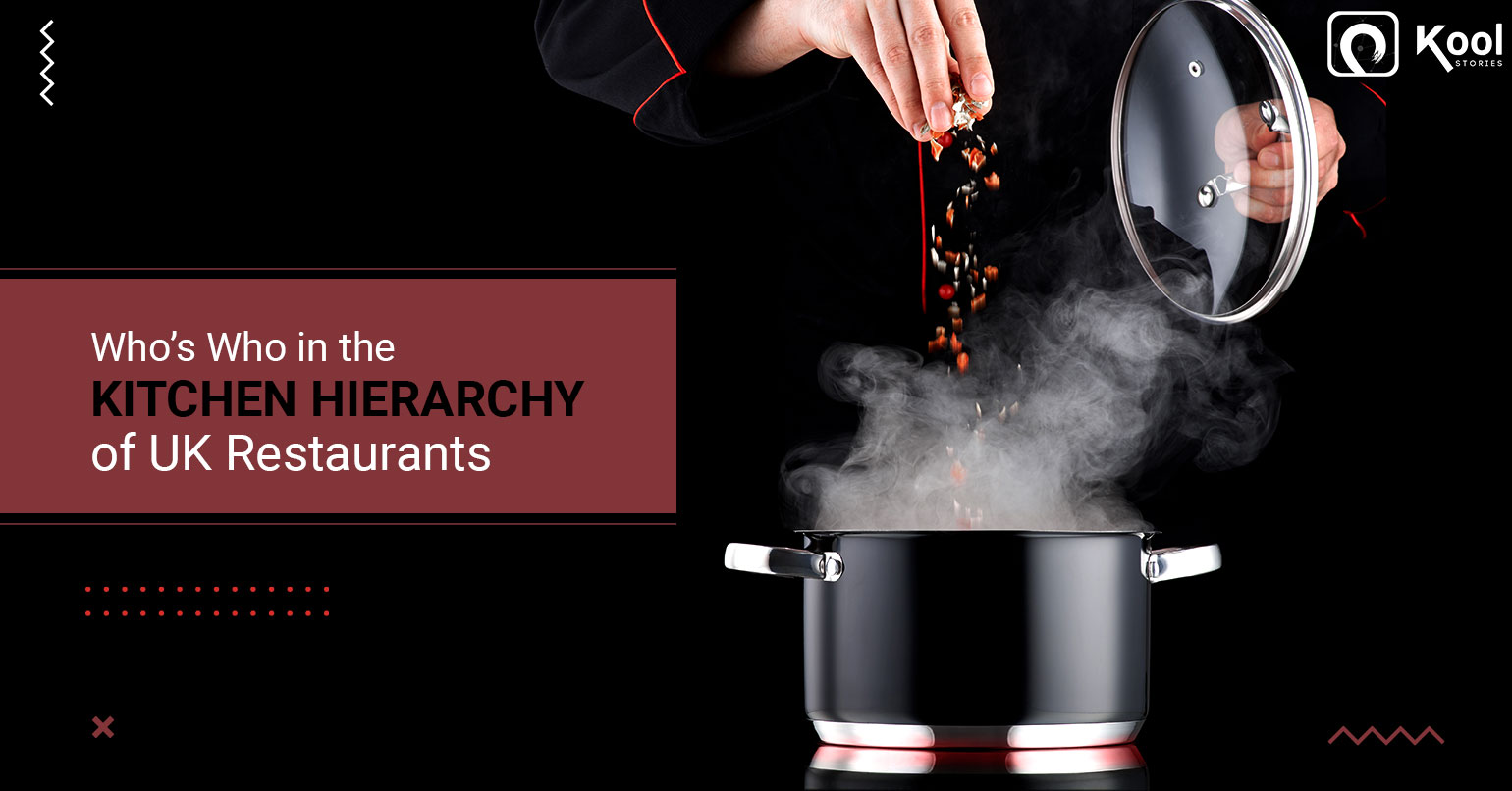 Ever wondered how too many cooks in a busy restaurant don’t spoil the broth? It is the chef hierarchy that makes it all possible.
Different chefs blend the magic of ingredients with their culinary skills behind those closed kitchen doors. This is how modern restaurants manage a heaving crowd and satisfy their taste buds.
Since all of them wear the same chef coat, you may often get confused and ask yourself, “what are the different types of chefs?” This article is precisely what you were looking for; an intro to kitchen hierarchy, chef titles and positions, contribution to kitchen management and diverse chef roles.

What is kitchen hierarchy?

In professional kitchens, the hierarchy that prevails is called Brigade de Cuisine (French). This squad system, adopted by the French ensures that all kitchen operations run smoothly. The different chef titles like ‘sous chef’, ‘chef de partie’ et al., make the kitchen hierarchy or the French brigade system.
Since this hierarchy is essential to a functioning kitchen, its structure varies on restaurant size and style. But broadly speaking, there are the following positions in a kitchen hierarchy.

Chef hierarchy in the kitchen

A restaurant kitchen is different from a home kitchen. With continuous incoming orders in a bustling restaurant, each chef or a cook performs a dedicated role. His/her chef title defines this role. To know this Brigade, it is crucial to understand each chef type with his culinary responsibility.

The kitchen hierarchy is divided into two broad chef types:

Managerial chefs look over kitchen management, business management and team management. Simultaneously, the specialised chefs are pros at what they do and stick to their expert domains.
If you are in the hospitality sector, you might be aware of how to scale up the kitchen hierarchy. Every chef begins from an entry-level and climbs his way up the ladder. Years of experience and education helps with this.
While there is no shortcut to becoming a chef and owning a Michelin star restaurant, you must begin by understanding how the hierarchy works and find your place.

The adjective ‘managerial’ is indicative of the responsibilities these types of chefs undertake in restaurant success. Their core role revolves around streamlining kitchen processes, managing the subordinates, menu architecture, supervising operations and training.
Here is an array of titles for managerial chefs in a descending fashion:

Every kitchen has a single group chef. This fundamental role circles around the management of the kitchen structure. In a kitchen hierarchy, this is the most prominent role. More often, the responsibilities of a group chef are interchanged with that of an executive chef. However, the positions are different and small establishments combine the two.

The head chef is at the top of the kitchen hierarchy. Every kitchen has only one executive chef, and he manages the Brigade de Cuisine on diverse kitchen operations. He has a core managerial role (that is very dynamic) and primarily oversees:

As we unravel the many responsibilities of a head chef, it is understandable that he discharges managerial duties and has less to do with the actual cooking. Like a manager supervising his group, an executive chef has a team of sous chefs who manage routine kitchen operations.

Sous Chef aka Second Chef aka Under Chef aka Deputy Chef

The second chef performs the critical role of team management. The term ‘sous chef’ is French for under chef. Besides having the same responsibilities as a head chef, a sous chef is more engaged with day-to-day kitchen activities. This makes him a critical component in the kitchen hierarchy. He is only second to the executive chef and manages the kitchen in his absence. Depending on the strength of the establishment, there can be more than one sous chef.

The role of chef de partie is pretty diverse. On the one hand, he assists the sous chef and chef de cuisine, and on the other hand, he manages the assigned kitchen station. Each station chef has a dedicated station he supervises to ensure that only the best dish, served in the most palatable manner leaves his station. Therefore, there is more than one chef de partie. Since they specialise in a specific type of cooking, there is no hierarchy between them and chef de partie are the Specialised chefs.

These chefs conduct actual cooking. In the kitchen hierarchy, they prepare the food that reaches your table. They are masters in their respected domains.

For easy understanding, the infographic below explains the distinct chef de partie titles.

There is no hierarchy between chef de partie themselves. But junior chef or commis chef work under them to learn and ameliorate their culinary training. Consider them as interns in the kitchen hierarchy.

After the junior chef, the kitchen porter, dishwasher (Escuelerie) and waiter/waitress (Aboyeur) are the lowest in the ranking order.

Chefs and cooks work for hours on end in commercial kitchens, and large restaurant chains to prepare their famous lip-smacking dishes that you devour within minutes. It is the efforts of managerial and specialised chefs which help a busy kitchen run smoothly. While the hierarchy depicted above may vary from kitchen to kitchen, different chef positions with their responsibilities contribute. As you work your way up the pecking order, try your hand at these skilful cooking techniques.

Want to know more about what goes on in the restaurant kitchen? Get into the cooking community at KoolStories. We have created a one-of-a-kind skill-sharing and learning app with features that lets you connect with anyone in your preferred skill domains, share valuable content to enrich the community and establish yourself as a brand. Download online skill-sharing app to kickstart your social learning and upskilling journey.