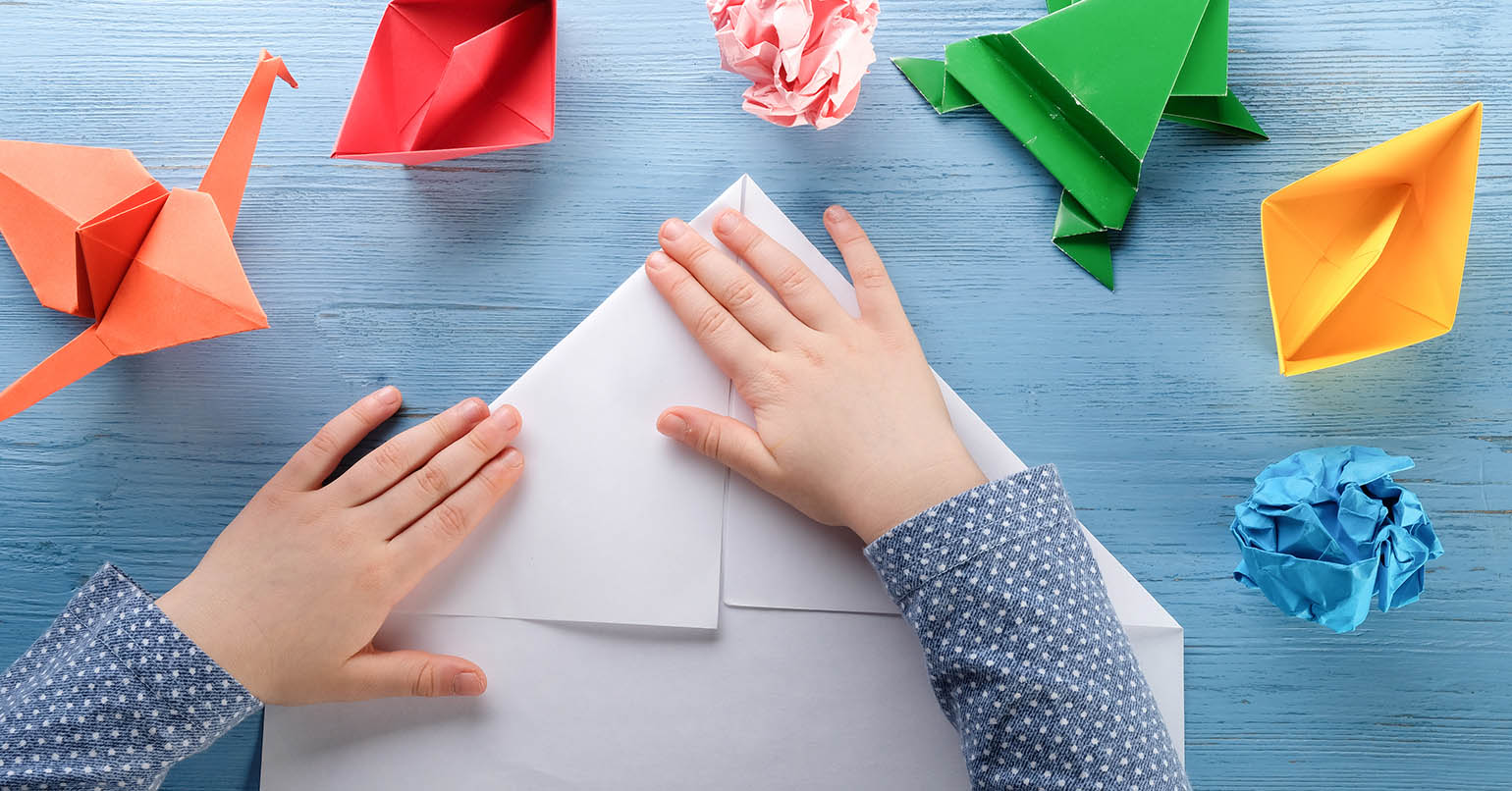 Origami is the art of folding paper. The revival of origami is gaining momentum and deserves all the limelight. The art is fast approaching classroom settings. Recognised for its many practical implications, origami is a fascination for both children and adults. Using origami models with illustrative diagrams and instructions can assist in the positive growth of your child's mind.

Let's unravel how a simple paper folding art can benefit your mind, body, and soul.

The Origin of Origami

This papercraft has Japanese roots, as 'oru' means 'to fold' and 'kami' means 'paper'. It is also a part of Chinese culture and is called 'zhezhi' in China. Origami is a skill that can be tried by all and is a fine brain exercise. It was popularised by origami grandmaster Akira Yoshizawa.

Benefits of Origami in a Nutshell

Considering its vital advantages, the Japanese have made origami a part of the elementary school curriculum. Broadly speaking, this art develops:

The Educative Aspects of Origami

Do you remember the last time you actually folded paper to make a flower or an aeroplane? Probably not. In most scenarios, the paper-folding art is dismissed as a fun pastime. But, it is time you get the best origami paper and acknowledge the magic it can create. This paper-folding skill is a must-try for adults and kids alike. Besides its therapeutic advantages, ancient origami art also benefits children in the modern-day classroom. We enumerate all the significant reasons why you and your kid should learn how to make origami.

Let's look into the wonders of origami one by one:

Despite its rich history, the use of origami to teach mathematical concepts like fractions and geometry is relatively recent. In geometry classrooms, students can understand the concepts of symmetry and shapes by realising them on a piece of paper. Even easy origami can give your brain the appropriate exercise to improve memory, concentration, confidence, and patience.

Origami adds to the learning by presenting an actual visual experience. When your child views it with origami, the learning becomes permanent. Moreover, this creative skill engages the mind, and the child actively performs while practising instead of being a silent observer.

Here are a few of the many things your child can achieve through origami learning:

The concept of symmetry- Origami teaches about symmetrical and asymmetrical patterns.

Measurements and Fractions: Creating an origami aeroplane or any other shape requires understanding measurements. For example, when you fold 2/3 of the way or bend the paper halfway to form a shape.

Geometry: Concepts of various shapes like squares, triangles, and rectangles are incorporated in origami. It can help your child understand easily which shape is what.

3D Comprehension: Origami learning process enhances the listening skills of students. The more they listen, the more they learn.

Origami is an art that involves both cognitive and motor skills. Research shows that the simple folds of paper can help in two ways:

Consequently, their hand-eye coordination improves, and their perceptual skills are strengthened.

How does this help your child?
More incredible perceptual skills give the ability to assess and recognise patterns. Your child becomes more adept at understanding a situation. Thus, students quickly grasp, evaluate, and act on any given information.

Here's a fun fact: Origami is not just a child's play. It has the answer to many questions in the field of physics, mathematics, and astronomy. It helps develop scientific theories and is a massive hit among researchers and scientists. Additionally, an entire field of origamists has brought a whole new side to the artistic world. Each fold of paper (called a crease) uses cognition and creativity simultaneously.

Did you know that many scientists shape their origami models as a problem-solving exercise?

For this reason, it has become an essential tool in the field of mathematics and mechanical engineering. Similar practices can also be used in the forming stages of education and child development. When it comes to building problem-, solving abilities, there are two aspects covered by origami learning exercises:

Both skills are needed to internalise a problem. This problem-solving outlook significantly impacts your child's behaviour and overall personality.

Origami provokes creativity and curiosity in a student. By folding a paper crease after crease, you eagerly anticipate the end result. It can be a plane, a flower, a rabbit, or even an elephant. There is n number of possibilities with origami. Children manipulating paper with their own hands gives them a sense of achievement. This further unleashes their creative powers.

Higher-order thinking skills get engaged in origami learning. Imagine working with all your imagination to put together the most aesthetic piece of creation. And you build it all from a single sheet of paper. Therefore, origami benefits by shaping individuality.

Easy and affordable, this Japanese staple has unconventional power in its ritualistic folds. On that account, origami classifies as a leading hobby to pursue. It can be learned from anywhere; all it demands is a leaf of paper. Beginners can follow and pursue this skill anytime.

Digital learning platforms, like Kool Stories, have made this process even faster for learners. Just look up an origami instructor, learn persistently, and you will be making easy origami in no time.

Socialising is an integral part of a person's growth. Origami is a powerful tool to build necessary social skills among kids. Consider it to be a means for children and adults to come together to learn and create something original. Schools use origami to teach the value of teamwork and cooperative learning.

As a group project, origami stimulates interaction, builds connections, and strengthens conversational skills. On a side note, children can gain rich knowledge through observation and by following instructions. Naturally, they become more welcoming of new perspectives.

Origami is more of a meditation that deepens with practice and patience. Such habits build sound social skills in children during their initial developmental years.

As an extraordinarily mindful and creative skill, origami has therapeutic benefits from educational ones. It promotes general wellness by attributing a person's sense of achievement and satisfaction. This is the same satisfaction creators relish when making things out of thin air.

When you fold a paper, it becomes an extension of your vision, and it leads to a feeling of happiness after its completion. Nevertheless, the entire process is extensively calming and zen-like yoga and meditation. It emphasises explicitly building focused thinking- a central habit of all successful people. Thereby, students doubly profit from mature cognitive skills and a healthy attitude.

It's true. Origami is gaining popularity as a means to relax. Well-known psychiatrists like Dr John Hillery from the College of Psychiatrists of Ireland explain origami as an absorbing activity that can improve one's mental health. It gives the brain the appropriate exercise to unwind the stress and live in the present.

Because of all the concentration it takes, origami can be an excellent way to shut out the internal and external negative voices and focus on the task. Additionally, the sense of achievement after making something using origami paper can help build self-esteem and confidence.

Science and mathematics are basic subjects that make up a school curriculum. But more often, students find them dull and lifeless. What if there's an interesting way to study these boring subjects?

Schools have started introducing origami for a change. Origami helps students simplify physics concepts by understanding 3D comprehension and theories. This way, origami promotes originality by giving students a blank sheet to experiment and design. Scientists like Kaushik Jayaram and researchers like Robert Lang have not only approved but also added to origami skill's success and relevance.

Apart from all these educational benefits, origami helps people develop their cultural skills. This art comes with knowledge of Japanese aesthetic culture and values. It is truly inspiring to see how a simple piece of paper unites people across borders.

After that exhaustive origami benefits breakdown, it's time to get down to the creative business. Here are 20 beginner-level origami projects and DIYs for students to undertake:

Want to improve your skills? At KoolStories, you get to learn your favourite interests in a funa nd innovative way. Join KoolStories today to explore more.